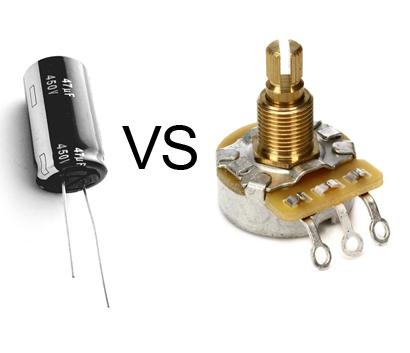 Capacitors vs Potentiometers – What do the capacitors do in your circuit?

Separating the direct current is often necessary for the performance of the circuit, but it is also a safety precaution to keep direct current from moving between the guitar and the amplifier, possibly creating a life-threatening electrical hazard. Removing any stray direct current is the reason we often see capacitors at the input jack, among other places.

Potentiometers are variable resistors that create a “fork in the road” for an electric signal. The best way to understand how a potentiometer works is to envision a left/right balance control on an audio stereo system. This particular potentiometer is the same as any other except that it has a divot built in, to let you know when you are precisely midway through the full throw of the pot.

If you stop at the divot in the middle of the potentiometer, the Left and Right Speakers will both play at half volume, because they each get half resistance. Since each Speaker is playing at the same Volume, we call them balanced or “centered.” All potentiometers work by using resistance to create a “fork in the road.” If you are not splitting a signal between Left and Right Speakers then you might be deciding how much goes to the next stage of an amplifier, how much gets filtered by a capacitor, how much goes to Ground, etc.