The Seven-Sound Strat Modification is an easy way for you to give your guitar more tone versatility, and despite its name, you can make this mod on any type of guitar that has three pickups and a five-way switch.

The five-way switch already gives Strat players plenty of versatility in tone. Position 1 is the Bridge pickup, Position 2 is Bridge + Middle, Position 3 is just the Middle pickup, Position 4 is Middle + Neck, and Position 5 is Neck. What the five-way switch does not provide is a way to select the Bridge + Neck pickup, or a way to select all three pickups at once. This is exactly what the Seven-Sound Strat Mod (also sometimes referred to as the Gilmour mod) provides for us.

All we need to do to complete this modification is add a switch to turn the Neck pickup on and off, independent of the five-way switch. By doing that, we can get a Bridge + Neck combination by selecting the Bridge pickup on the five-way switch and turning on the Neck with the second switch. We can turn on all three pickups by selecting the Bridge and Middle pickup with the five-way switch and using the second switch to turn on the Neck pickup. This gives us every combination of pickups and the largest variety of tones. The Neck + Bridge combination gives you a tone that you might expect from a Telecaster, while having all three pickups turned on gives you a very full and fat-sounding tone that is good for rhythm playing.

As I have said, in order to complete the seven-sound Strat modification, you will need to add a switch to the guitar. There are two basic options available to you; the first is a mini-toggle switch, and the second is a push/pull pot. If you have a guitar with a large pickguard, like a Stratocaster, that you can remove to access the wiring, then the mini toggle switch might be a good idea. Simply drill a small hole (usually a 1/4 inch) into the pickguard to hold the toggle switch and you’re done. If you have a guitar that does not have a pickguard, or you don’t want to drill a hole, you can use a Push/Pull Tone Control pot. The wiring for both is exactly the same and I will provide you with diagrams for each.

Before we get started, I’d like you to remember that you don’t need anything fancy for the toggle switch — no heavy-duty, high voltage, or anything like that. The guitar is a very low-voltage instrument and any small, decently built switch will probably last you a very long time. You can use a Single Pole Single Throw (SPST) toggle switch; it has two lugs to solder wires to and that is all you need. You can also use the other types, such as the Double Pole Single Throw (DPST), and Double Pole Double Throw (DPDT), if you want. In the diagrams below, I use a Double Pole Double Throw switch because I find it to be the most common type.

You don’t actually need to use a mini-toggle switch; there are many types of switches and buttons that you can use if you are creative and handy. They will all be wired the same way. We chose the mini-toggle switch because it can be installed by most people and doesn’t change the appearance of the guitar too much.

For this guide, I assume you have the guitar already wired up with a five-way switch and that it works fine. The wiring should look very similar to Fig 1. 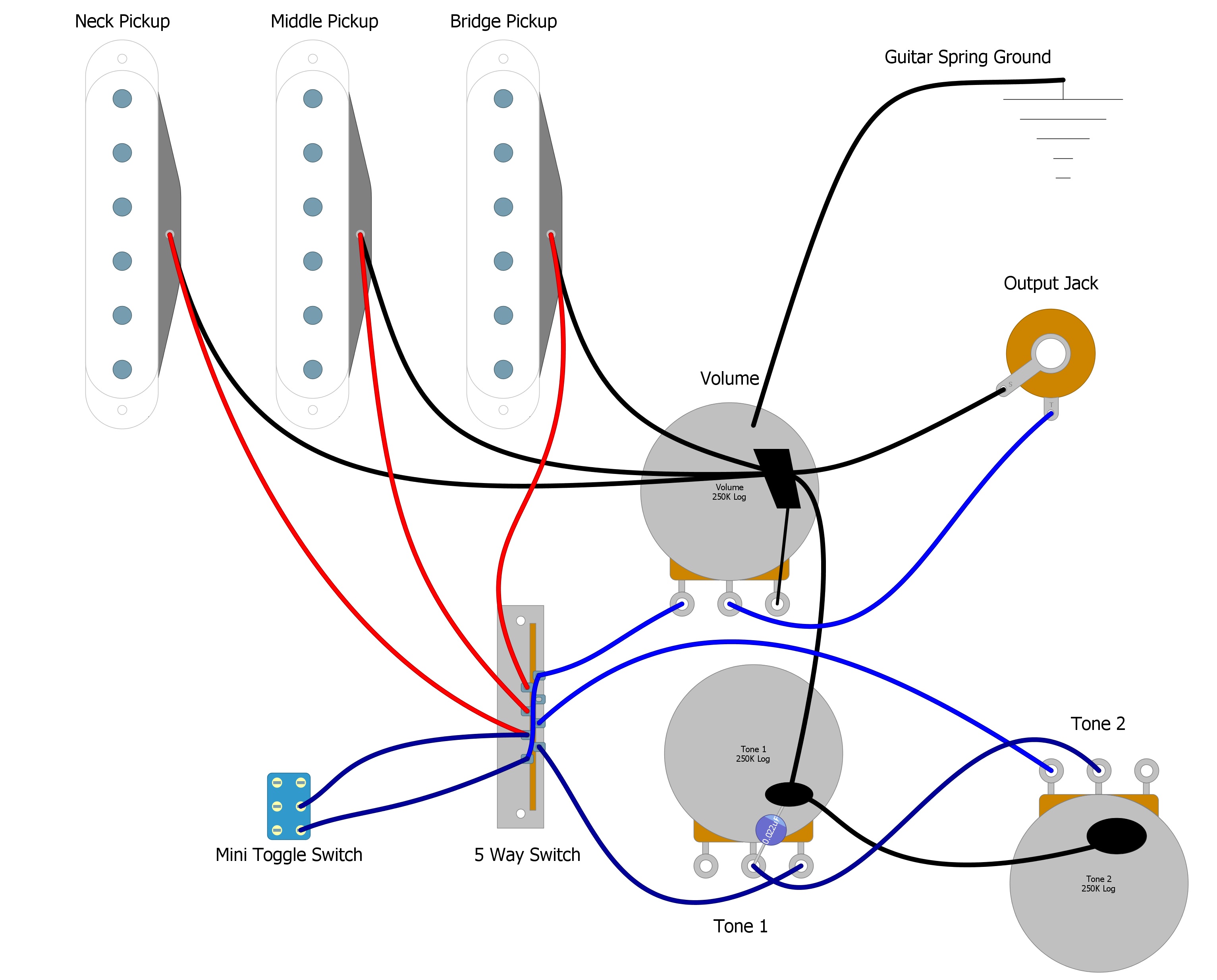 The first diagram shows the mini-toggle switch, using the DPDT, but you can use either an SPST or a DPDT. You just need to solder two wires that go from the new toggle switch to the five-way switch. Look at the “Mini-Toggle Switch” in the diagram (Fig 2) to see where to solder the wires. 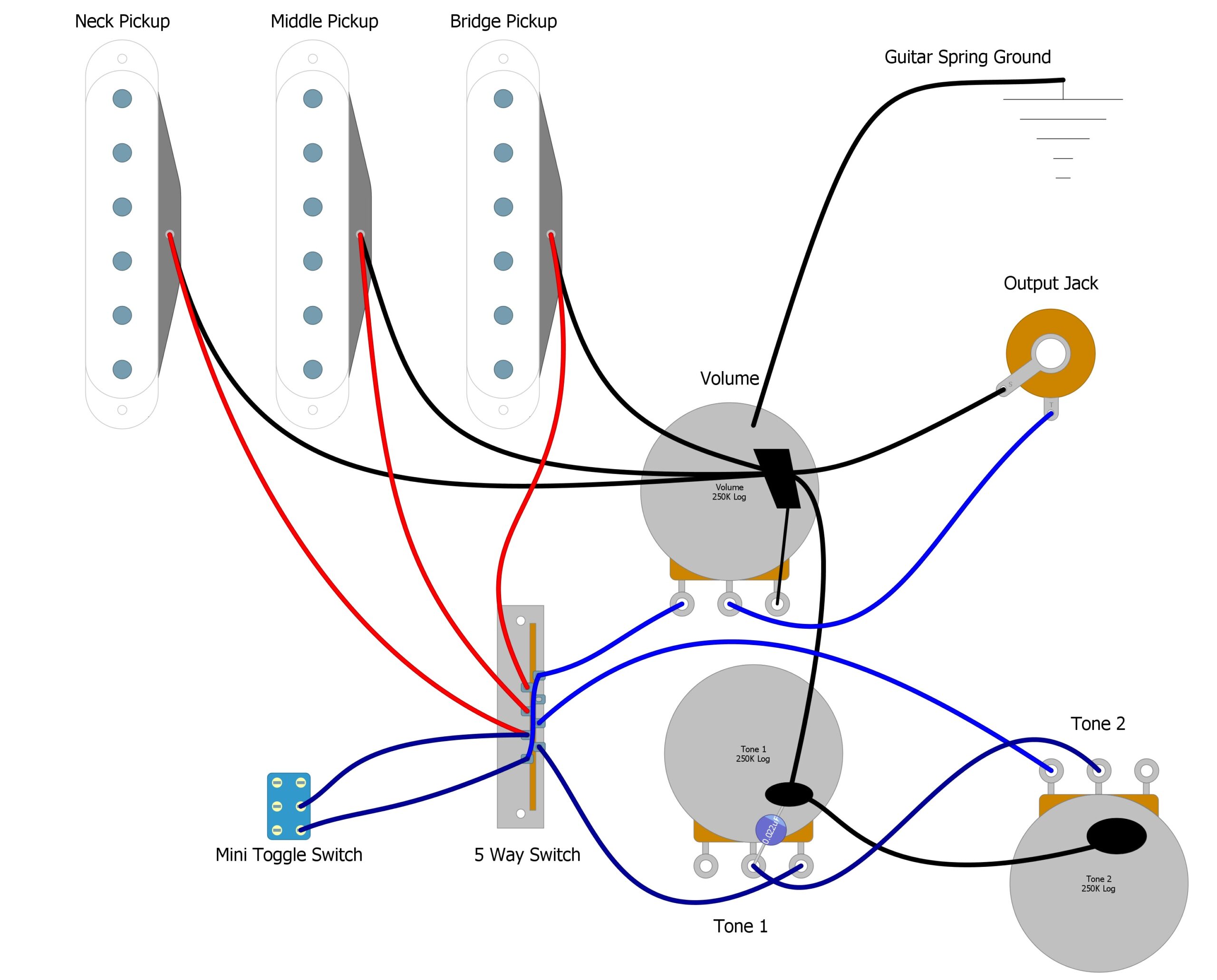 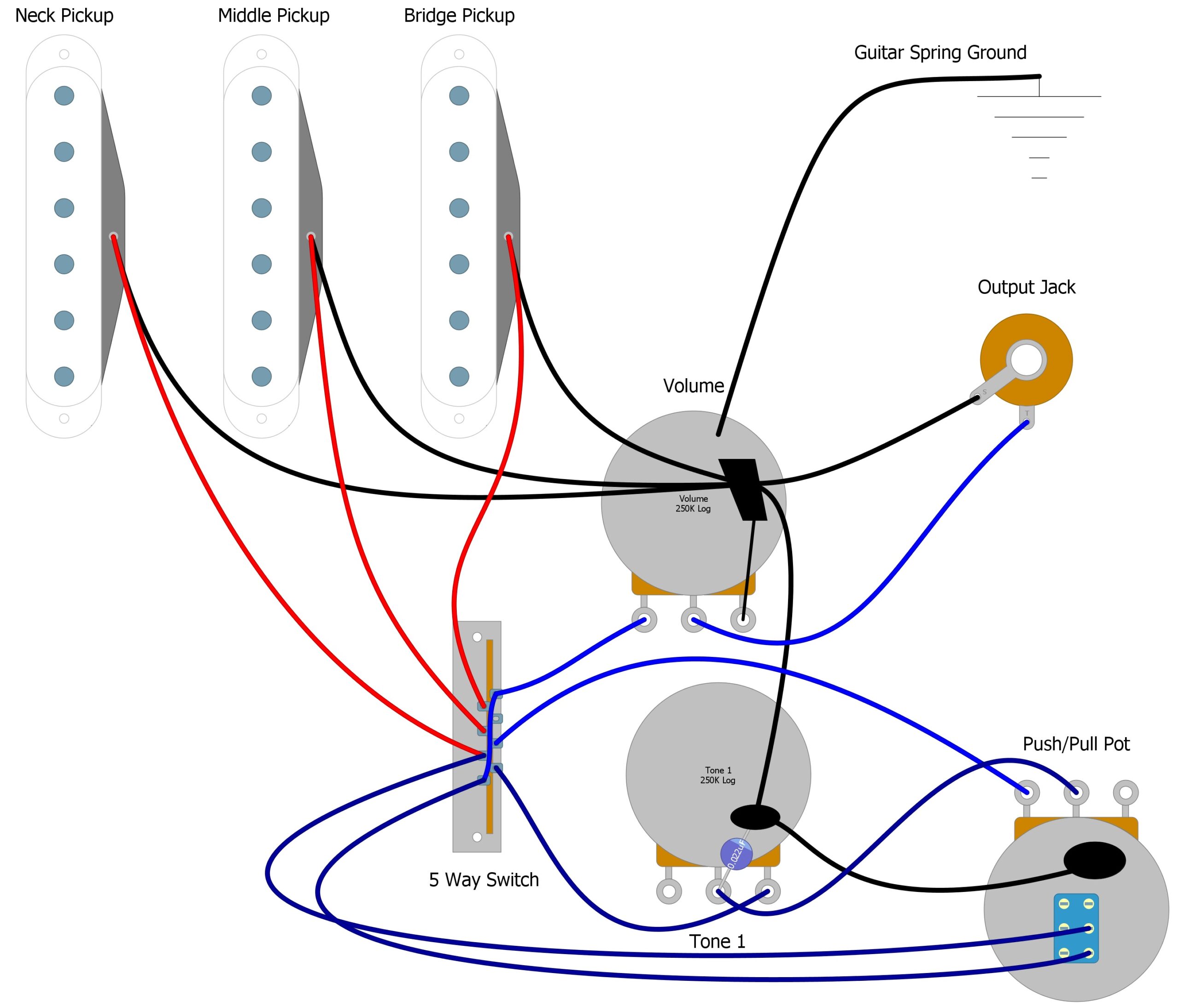 That’s everything you need to know! You should now be able to enjoy your new tones. You have taken an already incredibly versatile instrument and given it even more possibilities.