Many of us have amplifiers that use tubes. If you look on the inside, you will see there is often a set of power tubes along with a set of preamp tubes that you will need to change from time to time. This article will take a close look at the preamp section to see how the tubes work and how they differ from power tubes.

Keep reading while we look at current, electrodes, grids, cathodes, pentodes, and more to help you get a better idea of how your amplifier works.

What Is a Preamp Tube?

A preamp tube, like all other tubes, is an electronic component best described as the predecessor to the transistor, which was the predecessor to the IC chip. You can still find transistors in several electronic devices today, including effects pedals, but you will not find any tubes outside the music industry unless you are using an antique device.

What Are the Parts of a Preamp Tube?

Your preamp is a collection of several components sealed inside a vacuum. The tube works on the principle of thermionic emission, which is also called the Edison effect.  Thermionic emission is a complex subject, but we think we can simplify it a bit for this article. It states that as a cathode is heated, it will release electrons into a vacuum.

The cathode will need to reach nearly 1000 degrees Fahrenheit to release enough electrons to be useful so you can understand why your amplifier gets so hot and why it uses so much power. This high temperature also means that only certain materials are suitable as a cathode. These materials include tungsten and oxide-coated emitters. The oxide type is more popular because it releases more electrons at slightly cooler temperatures.

The anode is a small metal plate, usually fashioned into a cylinder that fits over the cathode. If you apply a voltage to it, it acts as a magnet, attracting the electrons to its surface. This attraction clears the fog and allows the cathode to release electrons at full speed again. If you reduce the charge to the anode, the cloud will form, slowing down electrons’ production. By altering the charge to the anode, you can alter the electron production.

The anode is also responsible for dissipating heat, and unlike the cathode, this component is nickel or a nickel and steel alloy. It may also use carbon or zirconium, and many power tubes will use a heat sink to remove even more heat.

As we mentioned earlier, the cathode will need to reach temperatures of a thousand degrees or more. The tube will use different methods to achieve these high temperatures, but the most common way is to use a heated tungsten wire placed near the cathode. This wire radiates heat and warms the cathode enough to release electrons. When you turn on your amplifier and are waiting for the tubes to warm up, it is this process you are waiting on.

The grid is an electrode that controls the current in the anode. It usually resembles a gauze mesh, though it can take other similar grid-like forms. There is generally at least one of these grids in every tube though there can be several if the tube uses multiple electrodes.

How Does a Preamp Tube Work?

Now that you know the parts of a vacuum tube, let’s see if we can figure out how they work together without having to get too scientific.

In Example 1, we illustrate the simplest design of the vacuum tube. In this diagram, you can see that the heater connects to a power supply to heat the cathode. When the cathode gets hot enough, it will begin to release electrons. These electrons have a negative charge and create a positive charge in the cathode when they separate. 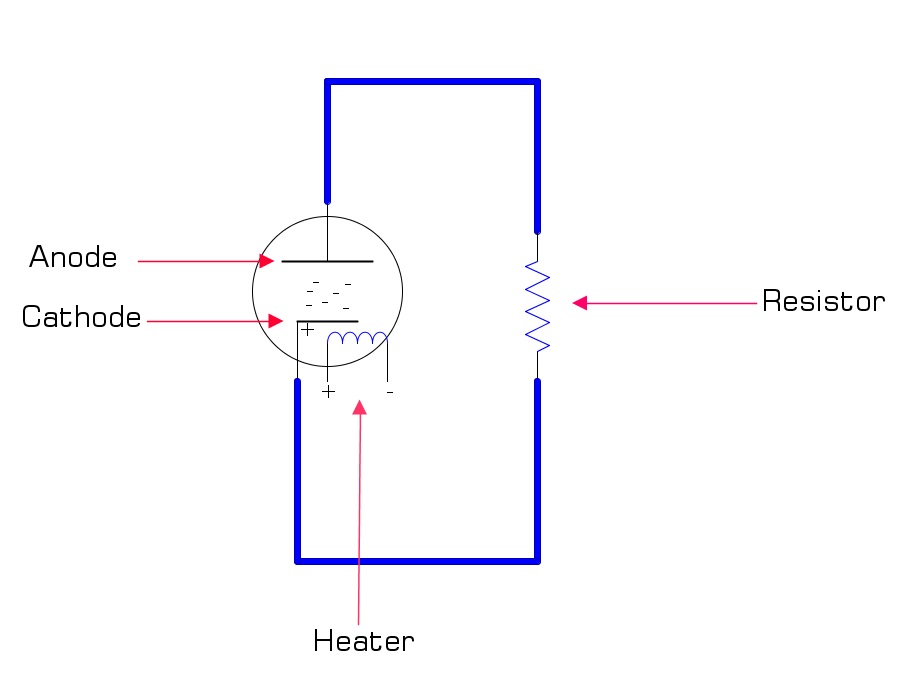 Some of the free electrons will reach the anode, where they will flow through the wire and resistor to the positively charged cathode. The process will continue to repeat, creating a current in the wire as long as the cathode is hot enough to release electrons. A hotter cathode will release more electrons, creating more current. If you replace the resistor with an LED light, it will begin to glow when enough electrons move through the wire.

Since there are two electrodes, the Anode and the Cathode, this is called a diode valve.

The triode valve adds a third electrode called the grid that we mentioned earlier. This grid is between the cathode and anode, and it allows you better to control the flow of electrons between the two. By applying a charge to the grid, you can attract or repel the electrons in the cloud. When you apply an audio waveform to the grid, you can create a mirror image of that waveform in the current that flows through the resistor. If you replace the resistor (or led light) with a speaker, you would hear the waveform. 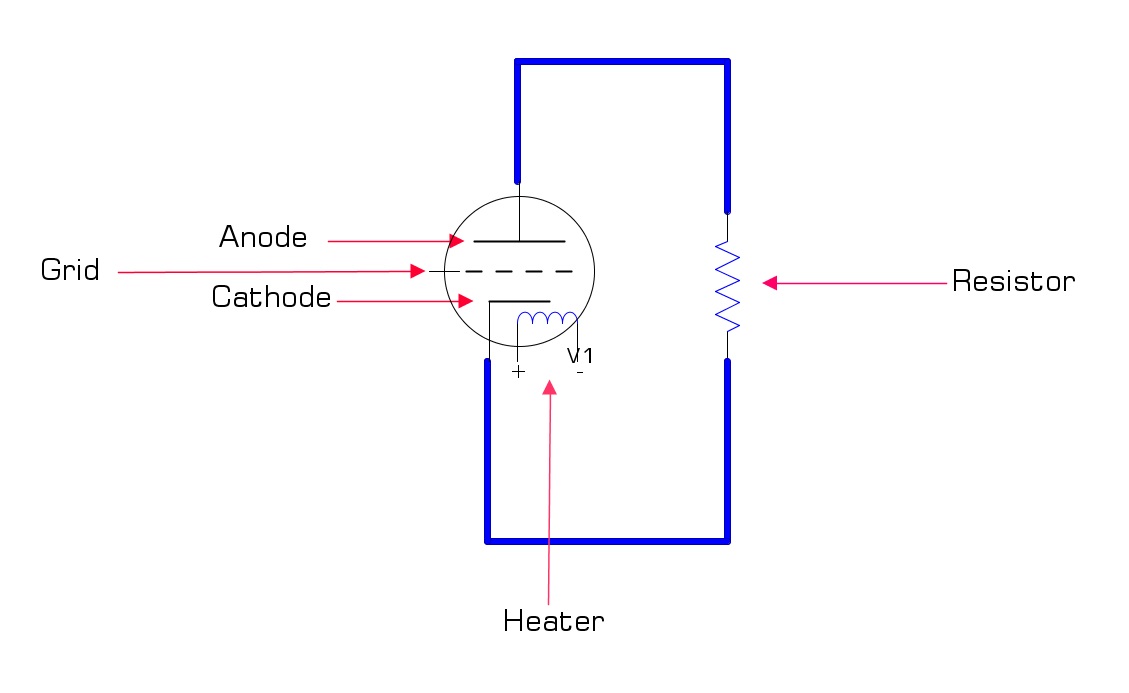 Hopefully, at this point, you have a good idea of how the tube works. Your guitar signal goes to the grid, where it interferes with the electrons flowing from the cathode to the anode, creating a mirror image or the waveform in the current of electrons. From here out, it’s mostly about improving the process. The triode valve doesn’t supply much gain, and it becomes unstable when trying to deal with too many electrons, so we add another electrode and create the tetrode valve. 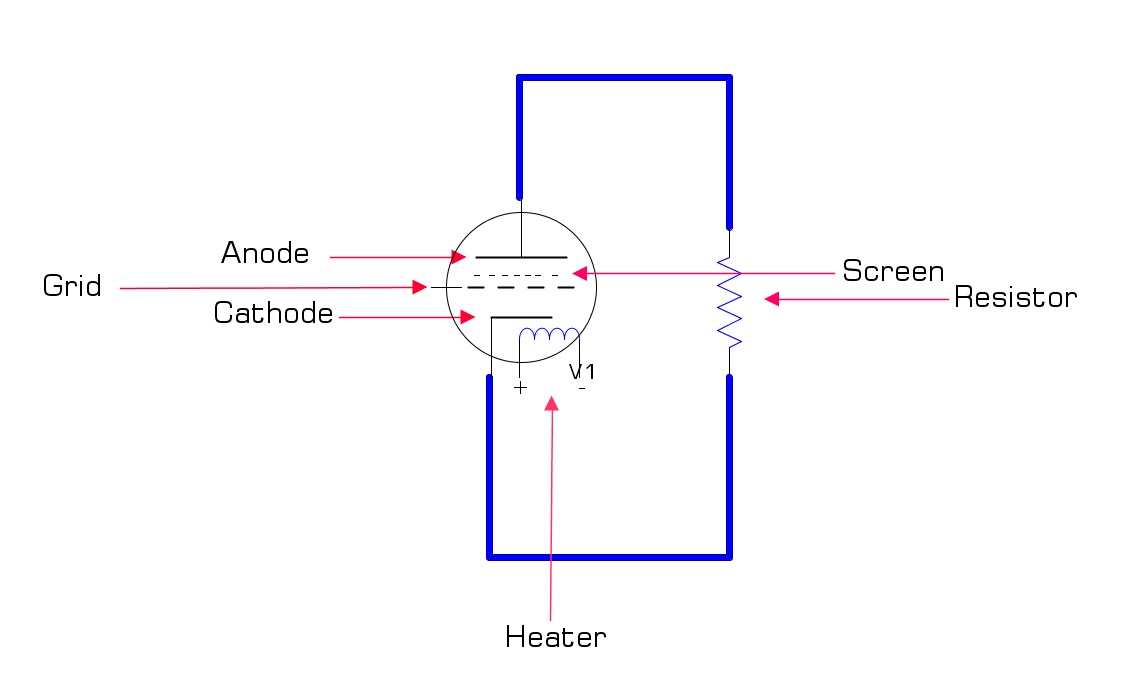 Unfortunately, the tetrode tube still leaves the signal with some unwanted artifacts, so it’s necessary to add one more electrode to create the pentode, which is the type of tube we use in our amplifiers in the power section. The pentode tube places another grid-like object between the screen electrode and the anode called a suppressor grid. This suppressor grid is connected to the cathode and creates a lower voltage region between the screen and the anode to eliminate artifacts created by the tetrode and create a clean signal in the current of the vacuum tube. 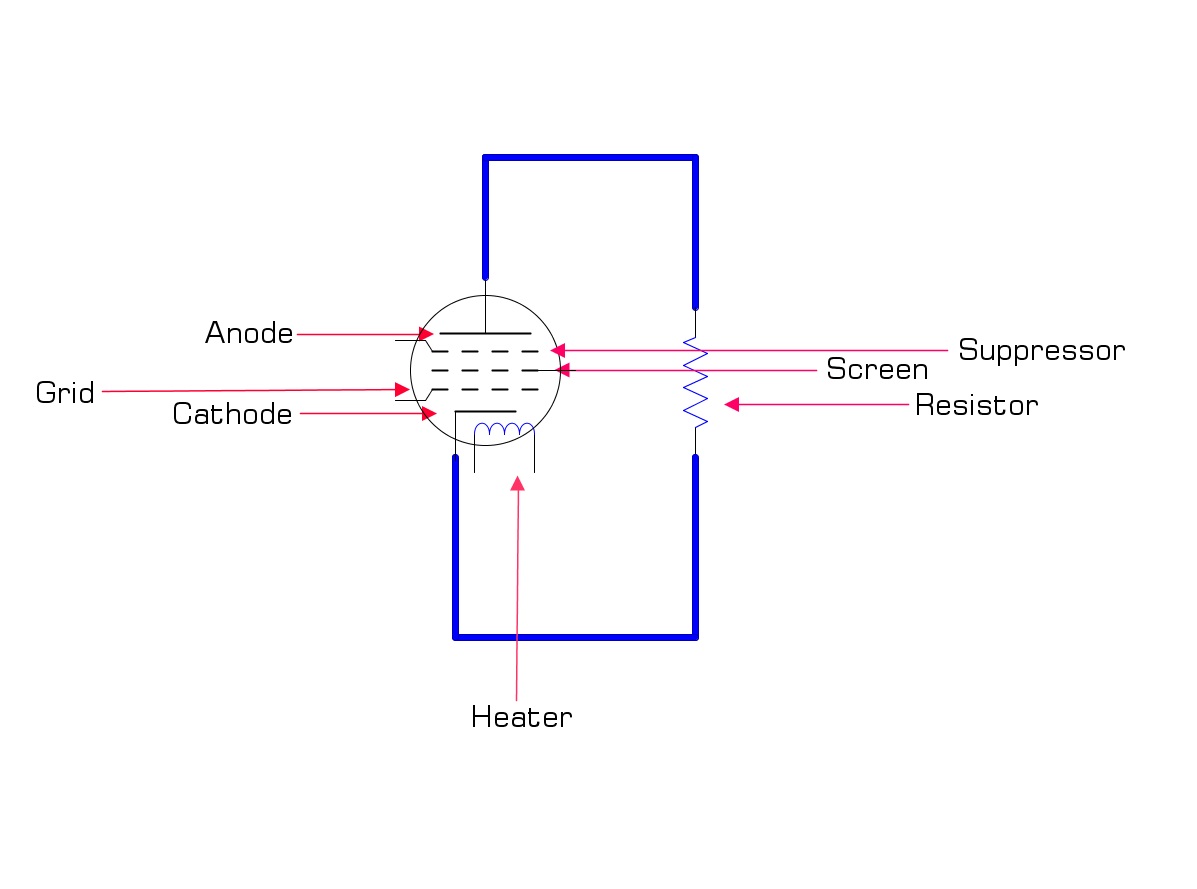 The primary reason you need preamp tubes is to convert your guitar signal into something your amplifier can use. You won’t be using these tubes to amplify your sound, so the simpler triodes will work perfectly. The sound from your guitar will connect to the triode’s grid, so the current flowing through the tube will make a mirror image of it. This current will then travel through the amp, where it will eventually enter the power tubes.

There are several brands of preamp tubes that are extremely popular and many more that are rare. We recommend starting with the most popular types but trying out others as your budget allows until you find one right for your playing. Like so many things, especially when it comes to guitar. A preamp tube is a preamp tube, so any will work. Still, the materials they make the components from and the tolerances they use will cause your tone to take on slightly different characteristics that may accent your natural playing style more than another tube. If you would like to learn more about how different brands can affect your tone, we recommend our many other articles, including ECC82 vs 12AU7 Tubes – What is the Difference?, ECC83 vs 12Ax7 Tubes – What is the Difference?, Preamp Tube FAQ: 12AX7, 12AT7, and 12AU7, and What’s the Difference Between the 12AX7, 12AT7. Any of these articles will get you started down the right path.

Vacuum tubes can be a difficult subject to understand, but it’s a little easier if you break it down and think about how each part works. You’ll notice in your amplifier that the power tubes get very hot, while the preamp tubes are comparatively cooler. Power tubes are hotter because they need to move more electrons to create the current required to move the speaker. Your preamp tubes are only a translator using your guitar signal to create variations in the current flowing through the tube.

We hope we have helped you understand your preamp tubes a little better, as well as tubes in general. If you have learned something new, please feel free to share this guide to how a preamp tube works on Facebook and Twitter. For more articles on guitar electronics, visit humbuckersoup.com.