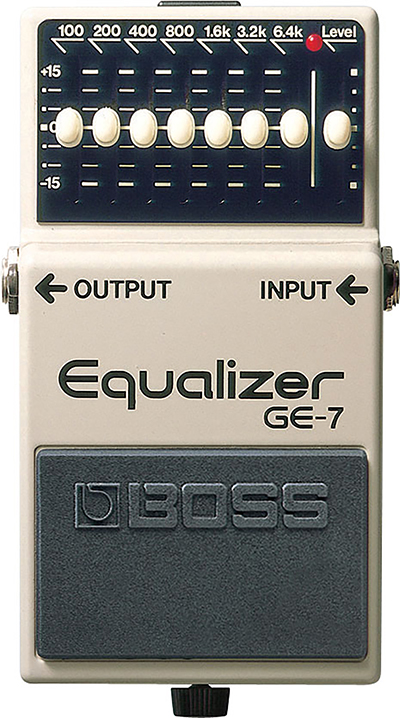 Filter effects are a subcategory of Dynamics and they deal with controlling the volume of certain frequencies.

Equalizers are one of the most common effects in this category and you can find an Equalizer almost everywhere that you find a Volume Control. It is built into your amp, your mixing board, almost everywhere you look. EQs work by using different values of Capacitors to target a certain range of frequencies, and a slider or Volume knob to “Turn Down” (filter to ground) those frequencies. Most EQs are passive, meaning they can only turn down the volume of the frequencies that they target.

A Notch filter is a type of EQ that singles out only a very narrow band of frequencies. These are good for getting rid of specific frequency problems such as a 60hz hum, or a high frequency whistle or feedback. Notch Filters often have a control to select the frequency that you want to filter out and they usually seek to completely eliminate the targeted frequencies as much as possible. Notch Filters are more often found as part of a Graphic or Parametric EQ than on its own. Take a look at the L.R. Baggs Align Series Equalizer, or BBE Acoustimax.

A Graphic EQ usually has 5 or more set “Bands” that divide the entire frequency spectrum (20hz – 20,000hz) into equal parts. These Bands are very similar to Notch Filters but they typically filter a much wider range of frequencies, and they allow you more control over how much those frequencies are filtered out. Each Band usually has a slider to control the volume of its assigned set of frequencies. You can find the Graphic EQ in pedal form, stand alone units, and also in many home stereo systems. A Graphic EQ can come in versions sometimes reaching up to 32 Band Stereo (64 bands). The EQ in your amp, or Distortion pedal will usually not be “Graphic,” but it will be much more like the Tone control on your guitar, usually two or more knobs labeled Bass, Mid, and Treble. These are actually a Graphic type of EQ with a capacitor filtering a set of frequencies. Just the slider is replaced with a Volume Pot and there are fewer divisions of the frequency spectrum. Take a look at the MXR M108S Ten Band EQ, or Boss GE-7 Graphic Equalizer.

A Shelving EQ is one that adds an equal amount of filtering to all frequencies above or below a certain frequency. For example, you might apply a shelving EQ to all of the frequencies below 80hz on a guitar or vocal, to remove low end rumble, or you might apply shelving to frequencies above 10,000hz of the bass guitar to help remove high end hiss. Shelving Filters are more often found as part of a Graphic or Parametric EQ than on its own. Take a look at the Radial Engineering Voco-Loco Effects Switcher.

The internal circuitry of the Wah pedal creates a “Resonant Peak” at a specific frequency. The user is then able to manipulate this frequency and sweep through a specific frequency range using the foot pedal. This sweeping motion is what gives the Wah its characteristic vocal-like quality. The Wah pedal is one of the most expressive effects available to the guitar player. Take a look at the Dunlop Crybaby GCB-95 Classic Wah, or Vox V845 Wah Wah Pedal.

An Envelope Filter is simply a gain controlled Wah pedal. It uses a circuit called an Envelope Follower that puts out more Current the harder you play. The Envelope Follower is tied to a sweepable filter and as the current rises and falls it acts like your foot on the Wah pedal, creating a very similar sound. Many players get the Filter and the Follower mixed up. The Filter is the Filter Effect while the Follower is just a circuit that puts out Current. A Follower can theoretically be used to control all types of devices (anything controlled by an expression pedal). Take a look at the Mooer Audio Micro Envelope Analog Auto Wah Effect Pedal, or SolidGoldFX Funk Lite Envelope Filter.