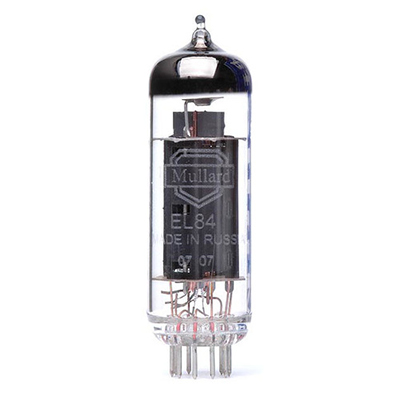 Power tubes can have a dramatic effect on your amplifier’s sound. At low volumes, the difference between one tube and another can be difficult to distinguish; for many listeners, it’s almost not worth talking about. Once you start to push a little air, however, your amplifier will show off what it can do and the power tube will display its individual characteristics more.

Keep in mind, that by using pedals, it’s easy to lose the original tone of a particular amplifier — although pedals can never truly replicate another amp’s sound, they can dilute the difference between amps. So, this discussion is focused on how a few of the most popular power tubes differ from each other when using the amp, and not the pedals, to get your sound. The tubes that readers ask about most often are the EL84, EL34 and 6L6. So, here is a rundown of how these tubes differ in sound.

The EL84 tube has a snarly sound (bright with midrange punch), and is usually found in smaller wattage amplifiers. It breaks up faster than the EL34, 6L6, and 6V6, and has the least amount of headroom of the four. The EL84 can be brighter than the EL34 and generally has a bit less low-end. In America, this tube is known as the 6BQ5, and was first produced for radios. This helped to eliminate the need for a driver tube and provided an inexpensive alternative to the larger audio tubes of the time. You can hear this tube in the Fender Bassbreaker, Fender Blues Jr., Peavey Classic 30, and many other popular amplifiers.

The EL34 is found in the most well-known UK heads, such as Marshall, HiWatt, and Sound City, and many stereo amps years ago. This power tube also have a snarly sound, but it’s a little warmer-sounding than the EL84. The EL34 is larger and it puts out two to three times the wattage as the EL84. More watts equals more volume, more headroom, and a better frequency response — even at low volumes. Lower bass frequencies require more power, and the higher wattage of the EL34 is better able to handle the full frequency spectrum. The increased headroom can lead to a more open and less compressed sound than that of the EL84.

This tube is most often associated with the “British Sound,” an expression that describes these more saturated and aggressive sounding amplifiers. You can hear it today by listening to the Marshall Origin20C, the EVH 5150IIIS, and Mesa/Boogie Lone Star Special.

The 6L6 is the power tube most associated with the term “California Sound.” This tubes is usually associated with American-made amplifiers more so than British. 6L6 tubes have been a mainstay in Fender amplifiers for more than 70 years. A Fender amp with 6L6 tubes is widely considered to be the “gold standard” by which we judge clean guitar tone. It’s got plenty of headroom, and doesn’t break up nearly as quickly as the EL84 or EL34. The 6L6 tends to put out a much brighter tone with more top-end sparkle (e.g the “Fender Chime”), while still allowing plenty of low-end to come through. You can hear this tube in the Fender Hot Rod Deville III 410, Mesa/Boogie Roadster, Peavey ValveKing 100 and many more.

Originally designed to be used in less expensive consumer radios, the 6V6 tube is just a scaled-down version of the 6L6. It has the same “California” or “Tweed” kind of tone most often associated with Fender amplifiers, but it uses less power and is a lower-priced tube. Consequently, you do get a little less headroom and it breaks up earlier than the 6L6. It’s still very popular in guitar amplifiers. You can hear it by listening to a Fender ’57 Custom Deluxe, Randall RD5H Diavlo, Ibanez TSA15H, and many more.

Start by listening to your own playing. If you play with distorted tones 75% of the time or more, then you probably want to look at EL34 and EL84 tube amps first. You probably want the natural breakup of the tubes to distort your sound and give you that warm crunch that made you want to play the guitar in the first place. Many people agree that a pedal just doesn’t sound as good as natural amp overdrive. And EL34 and EL84 tubes just enhance natural amp distortion so nicely and drive the amp so well.

If you use distortion less often, you might want to consider the 6L6 and 6V6 tube amplifiers. The crystal-clear clean tone and infinite headroom of these amps is a great foundation to add pedals and get any sound that you want.

Again, it’s not likely that you would feel the differences between the tubes at low volumes. It’s when you start to push an amplifier that the characteristics of these tubes become more apparent. Keep in mind that as much as power tubes differ, amplifiers differ as well. Depending on how the amplifier is designed, the overall voice and behavior of the power tube will vary. If you want to really get a feel for how these tubes differ in sound, get your hands on something like the Mesa Lone Star, which can use both the EL34 and 6L6 power tubes.