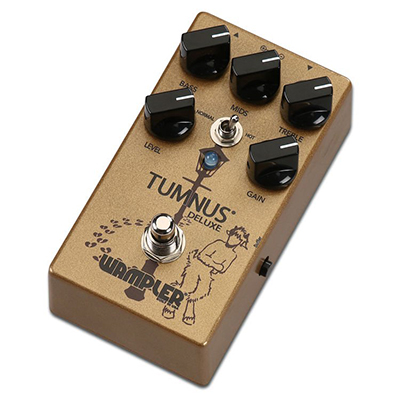 Delivering a wide range of overdrive tones and a clean signal boost, the Wampler Tumnus Deluxe Overdrive pedal includes Level and Gain controls, a Gain switch, and a 3-band EQ for tone.

There’s also a center-mounted switch to toggle between two levels of gain and a three-band EQ for fine-tuning your tone. The EQ works a little differently than standard three-band EQs in that the Low and MID controls are active filters capable of adding boost or cut, while the Treble is a more common passive filter that only allows cut.

The Tumnus features a transparent buffer amp that delivers a nice, clean boost to your signal. On the side is a convenient switch that allows you to turn the buffer on or off. With the switch in the on position, the buffer amp adds boost, even when the pedal is off. With the switch in the off position, the pedal has true bypass for uncolored sound. The Wampler Tumnus Deluxe Overdrive runs on a 9-volt battery, or a 9-volt power supply.