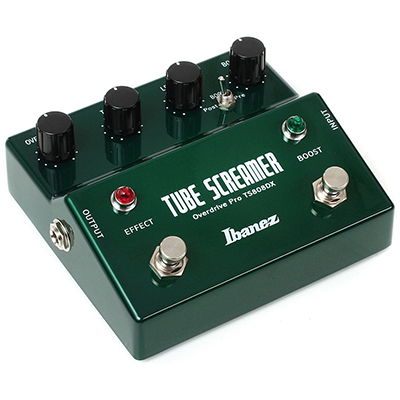 The TS808DX, Ibanez's latest version of its Tube Screamers, is two pedals in one and includes a Boost control and pre / post switch for boost placement.

The Ibanez Tube Screamer TS808DX is the latest iteration in the line of Ibanez Tube Screamer pedals. This modern version has some cool features that have not been seen before. The TS808DX is actually two pedals in one: the Tube Screamer and a clean signal boost. It features the same three control knobs you probably know from earlier versions: Overdrive adjusts the amount of overdrive added to the signal; Tone adjusts the level of high end frequencies present in the signal; and Level adjusts the volume of the pedal to match it with the signal when the effect is disengaged.

There’s an added Boost control which adjusts the level of clean signal boost when the boost switch is engaged, providing up to 26db. There’s also an added pre/post switch that places the boost before or after the overdrive circuit and each has its own effect on the sound of the overdrive. Overdrive and Boost can be used simultaneously or on their own and the TS808DX features Ibanez’s new relay-based true-bypass switching so there’s no “pop” when turning either effect on or off. A switch on the back lets you select 9 or 18 volts for more headroom, but it still only requires a single 9-volt battery or standard 9-volt power adapter to run the unit.