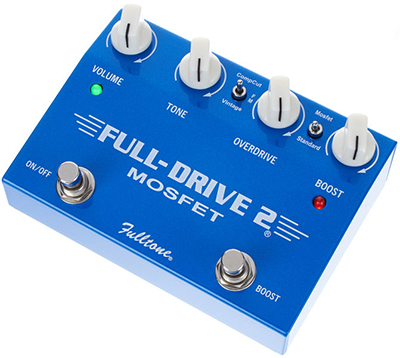 The Fulltone Full-Drive2 MOSFET is a two-channel overdrive pedal housed in a very sturdy, powder-coated Blue 16-gauge steel enclosure. The first channel is Overdrive, giving the player a clean boost, or light to medium overdrives while retaining your guitar’s tone. The second channel is the Boost, with its own separate distortion control and delivering medium to higher gains, and adding sustain to the signal.

There are two foot buttons, both with super-bright LEDs to let you know what is selected, and both feature Fulltone No Pop, No Thump, switches. The first button turns the unit on and off and the second switches between channels. It is powered with a 9V-18V DC power supply or two AA batteries.