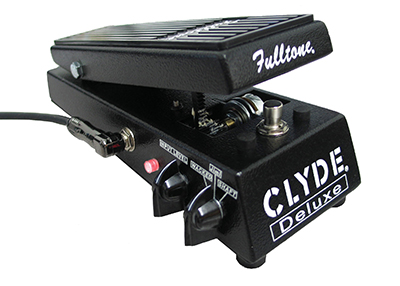 The Fulltone Clyde Deluxe Wah uses a very quiet MU-80 (80% nickel alloy) shielded Fulltone 500mH inductor that is hand made and designed to be the same as the inductor in the '60s Vox.

The Fulltone Clyde Deluxe Wah is the Fulltone version of the Vox “Clyde McCoy” Wah, a well known vintage Wah used by Jimi Hendrix. This pedal has one of the largest pedal sweeps of any wah on the market. It features true bypass switching and an LED indicator. A three-way switch allows a player to select between three modes. Shaft mode is designed to sound like a Funk wah from the ’70s. JIMI is the standard mode and it’s designed to deliver the wah sound of the ’60s, and the Wacked mode is designed to have a bit more low end to it than your typical wah pedal.