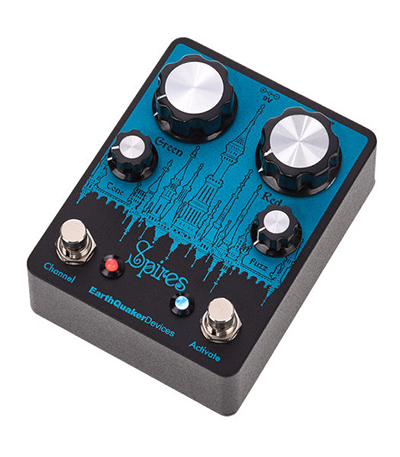 The Spires Double Fuzz is two pedals in one: the Green Channel, which is a cranked fuzz effect, and the Red Channel, which has the classic two-transistor fuzz.

The Earthquaker Devices Spires Double Fuzz pedal is actually two different fuzz pedals in one box: the Green Channel and the Red channel. The Green Channel is a cranked fuzz effect inspired by the Rosac Electronic Nu-Fuzz and is a “sonic clone” of that pedal. With the Green Channel the fuzz is constant, and the Tone knob adjusts the brightness of the overall tone.

The Red Channel is a recreation of the now discontinued Dream Crusher, but with a modern design that is more stable and less temperature-sensitive. It does, however still have the classic two-transistor fuzz. The effect on the Red Channel always has the same tone, but you can change the amount of fuzz using the FUZZ control. There are two foot switches, one to turn the unit on/off and one to switch channels. Both of these switches have their own LED indicator.

Each of these pedals is handmade in Akron, Ohio, and they use a relay-based “soft touch” switching. The pedals require a standard 9 volt DC power supply with a 2.1mm negative center barrel that is not included. The people at Earthquaker Devices recommend pedal-specific, transformer-isolated wall wart power supplies or multiple isolated-output supplies, to keep pedal noise to a minimum.