Roxanne, the very popular first single by The Police, helped make them a household name. But with only two main sections to learn, it's a very easy song to play.

This time we take a look at the song “Roxanne” by The Police. This song was written by Sting in 1978 for their debut album “Outlandos d’Amour.” This was the first single and it helped make The Police a household name. You can hear Sting accidentally sit on a Piano and laugh in the very beginning. With only two main sections to learn, this is a very easy song to play.

This song is in the key of G Minor Aeolian, which is a mode of the A# Major scale, and they share the same notes.

The Intro can be split into two parts to make it easier to look at.

The first two measures is the first part of the Intro, and it features the Guitar playing a staccato G Minor chord in a manner similar to the way it will be played for most of the song. There is no Bass yet and it looks like this. (Fig 1)

Let’s take another look at that G Minor chord. (Fig 2) 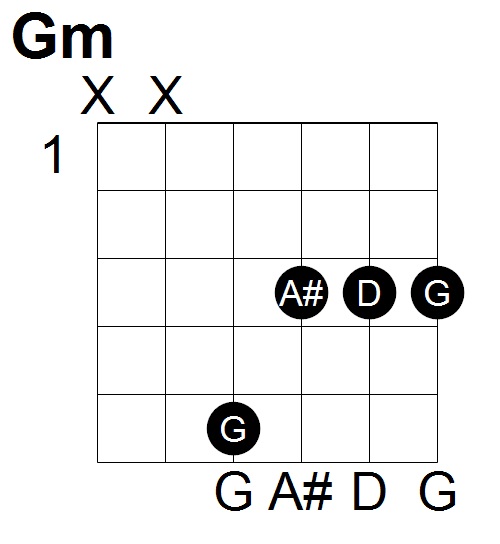 There does seem to be some dispute over whether he is playing the top three or the top four strings for these and the rest of the chords in the song. For me, it sounds fuller with the four strings, but using three will make it a lot easier to learn and is a great place to start.

The second part of the Intro is eight bars long and it introduces one of the main chord progressions used in the song and also introduces the bass. Let’s look at it three measures at a time. The first three bars look like this. (Fig 3)

Here’s another look at those chords. (Fig 4)

You can see that the progression starts with the same G Minor chord from Part 1 and then moves to an inverted D Minor chord. You might also consider this chord an F Major 6 chord. Either way, you can probably safely substitute the standard D Minor chord here, especially if you have a Bass player supplying the F. The next chord is a D Major 7.

Here is another look at those chords. (Fig 6)

We have already learned how to play most of the verse. It starts by playing Part 2 of the Intro two times followed by this next section of music that is also eight bars long and leads right into the Chorus.

We have already seen each of these chords before, but here is another look. (Fig 8)

We have also seen these chords, but here is another look (Fig 10) 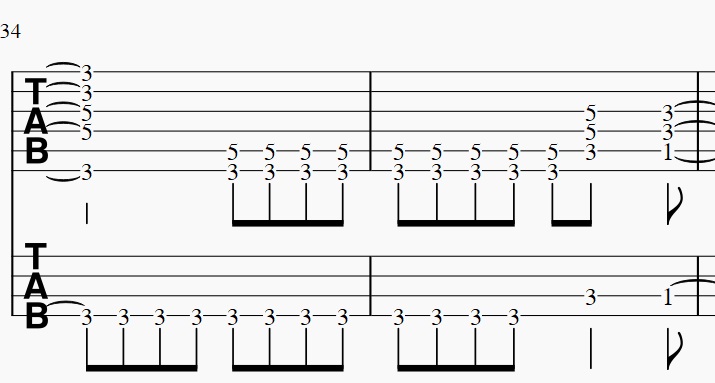 These are just basic power chords, but it should be noted that the last beat and a half of the second bar is the beginning of the Chorus.

The Chorus is a 12 bar section of music that we will split up into a few parts to make it easier to look at.

The first four bars of the chorus look like this. (Fig 13)

Here is another look at those chords. (Fig 14)

It is quite a few chords, but they are all power chords and are easy to remember.

These are all of the same chords that we have been using and the rhythm stays constant through this section.

We can see here that at the end of the second bar, the chords are held out and the music is allowed to die down. At the very end of the 4th bar, the lone F note played by the Bass Guitar brings in the next section.

This Pre Verse is a section of music that comes after the first Chorus and is very similar to Part 1 of the Intro, where the Guitar plays a staccato G Minor chord. This time it lasts for four bars, while the Bass plays F-G then G- F and repeats a few times to set up the second verse.
This is what it looks like. (Fig 17 and Fig 18) 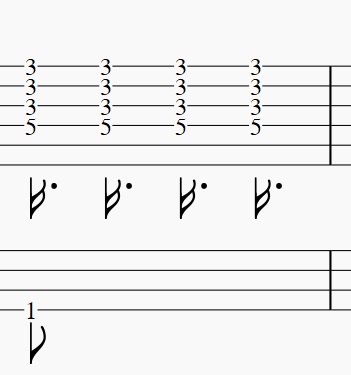 Once you have learned these few sections of music it is time to play the song.

That is all there is to it. With no solo to worry about, this a pretty good song for beginners to learn.