The beginning Guitar section of Gimme Shelter, by The Rolling Stones, can be a bit of a challenge, but with a little practice, you'll find it to be worth the effort.

Gimme Shelter, by The Rolling Stones, was written by Mick Jagger and Keith Richards for the 1969 record “Let It Bleed,” on which it appears as the opening song. It features an Open Tuning on the Guitar; in other words, the strings are tuned to an open chord, instead of the standard tuning.

For Gimme Shelter, the Guitar needs to be tuned to an E Major chord: E B E G# B E, from low to high. Once you have the tuning down, the song is not very hard to learn and there are only a few changes that you’ll need to learn. The beginning Guitar part can be a little bit of a challenge to master at first, but with a little practice it will smoothen out nicely.

This song is in the key of C# Aeolian Minor, which is a mode of the E Major scale and they share the same notes.

The Intro is a 24 bar section that introduces, then gradually builds toward the first verse. We will split it up into four parts, to make it easier to look at.

Each of these parts is a four-bar section that may or may not repeat; they are each pretty similar, with some slight modifications. Here is what the first part looks like. (Fig 1)

Here is another look at the chords (Fig 2)

We can see by the chords above that there are four main chords in the progression and that it goes G#7sus, F#7sus, E7sus as the main progression, and then E7sus, F#7sus, B5 is used as the turnaround. This chord progression remains constant throughout the entire Intro and only the embellishments and passing tones change. In this first part he “plays it a little looser” as he gets going into the song and it is only played once.

For the second part he “tightens it up” and plays with a steady eighth note rhythm. This four bar section is played twice and looks like this. (Fig 3)

The third part adds some nice embellishments to the progression and is also where the Bass Guitar enters. This section is played two times and gains in intensity each time, but the Guitar stays pretty much the same. It looks like this. (Fig 4)

The fourth part is only played once and it does add some new chords. It looks like this. (Fig 5)

Let’s take another look at the three new chords that we see in the fourth bar. (Fig 6)

We can see that the new chords are an E Major, an A5, chord and a B5 chord, and this section of music sets up the verse and is used again as the turnaround of the chorus, later in the song.

The next part we are going to look at is the Verse. It is a 4 bar section that repeats and looks like this. (Fig 7)

We can see from the figure above that the Guitar part is a two bar section of music that repeats once and is played over a four bar question and answer style bass line. Let’s take another look at the chords. (Fig 8)

We can see that the chord progression in the Verse goes from C#5, to E6, to C#5, to F# Major, to C#5. At the end of the second and fourth bars there are three eighth notes that go C#5, E6, C#5 in this example, but Keith sometimes adds some different fills in this section.

The next part we look at is the Chorus and it is a four bar section that looks like this. (Fig 9)

We have seen the 4th bar already but let’s have a look at the chords in the first three chords. (Fig 10)

Keith Richards sticks to the C# Pentatonic scale at the 9th position for all of the Lead Guitar work in this song. (Fig 11) 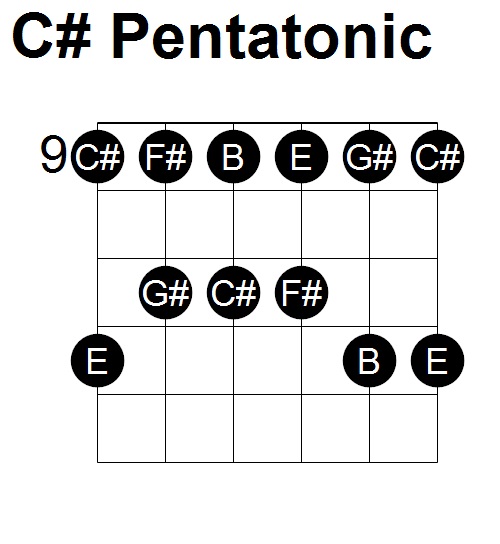 Once you have these parts down it is time to play the song.

3 Replies to “Gimme Shelter, by the Rolling Stones – How to Play”