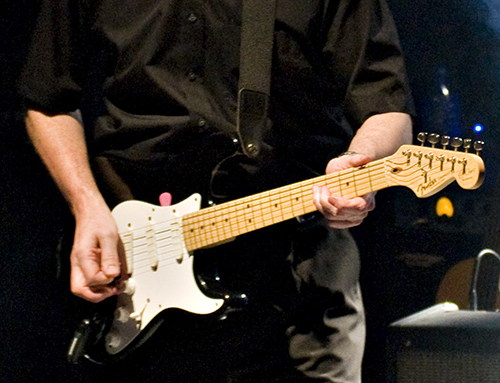 Here's how to play Eric Clapton's 1976 classic, Cocaine, an easy to learn song in which the legendary guitarist uses the Blues scale for all of his playing.

Cocaine was actually written by J.J.Cale in 1976 and Eric Clapton made it popular in 1977 on his record “Slowhand.” We’ve chosen Cocaine because it is very easy to play and dissect, while still containing many of the important points to remember when writing a great song.

This song is in E Minor Aeolian, which is a mode of the G Major scale.

Eric Clapton uses the Blues scale for all of his guitar playing in this song. The Blues scale is a modified Pentatonic scale and we build a Pentatonic scale by using the 1st, 3rd, 4th, 5th, and 7th notes of the Aeolian scale. We omit the second and the sixth notes, leaving us with five notes to choose from and the name “Pentatonic.”

The song has only one section of music that keeps repeating throughout. We will break it up into two parts for easy explanation. The first part repeats six times, and then you’ll play the second part once.

The first part starts out very strong and only uses two “5th” chords (also called Power Chords): the E5 and the D5. The progression of chords is E-E-D-E-rest-D. (Fig 1)

Here is another look at the two chords from above. (Fig 2)

Both of these are 5th chords, meaning that each one contains only two notes: the Root and the 5th.

These two chords give our ear four tones: E, B, D, and A — almost the complete Pentatonic scale in the first few seconds of the song. This helps our brain instantly recognize what key the song is in, and allows our ear to relax and listen to the music.

Another very important part of the song that is introduced right at the start is the strong 4/4 beat set up by the Bass and the Drums. It is a very simple pattern that quite effectively drives the song. (Fig 3)

The chords used in the turnaround for this song are E, D, C, and B. It is a descending progression beginning with the same two chords that the song has been using, adding a C5 chord which adds the C and G notes along with increasing tension before resolving to the B5 chord which adds the B and F# notes to the song. (Fig 4)

Here is another look at those chords (Fig 5)

As you can see, this song uses the B chord in the turnaround. The C chord helps to create tension because it is only one-half step away from the B. This is sort of like drawing the string back on a bow and arrow, and when you finally play the B chord it is like letting the string go and firing the word “Cocaine” deep into the heart of unsuspecting listeners The song immediately kicks back into the beginning chords, completing the V – I progression, leaving your mind and ears satisfied.

The entire song is played by repeating the same section over and over, from beginning to end. To play one section, play Part A from above six times and then play Part B from above one time. 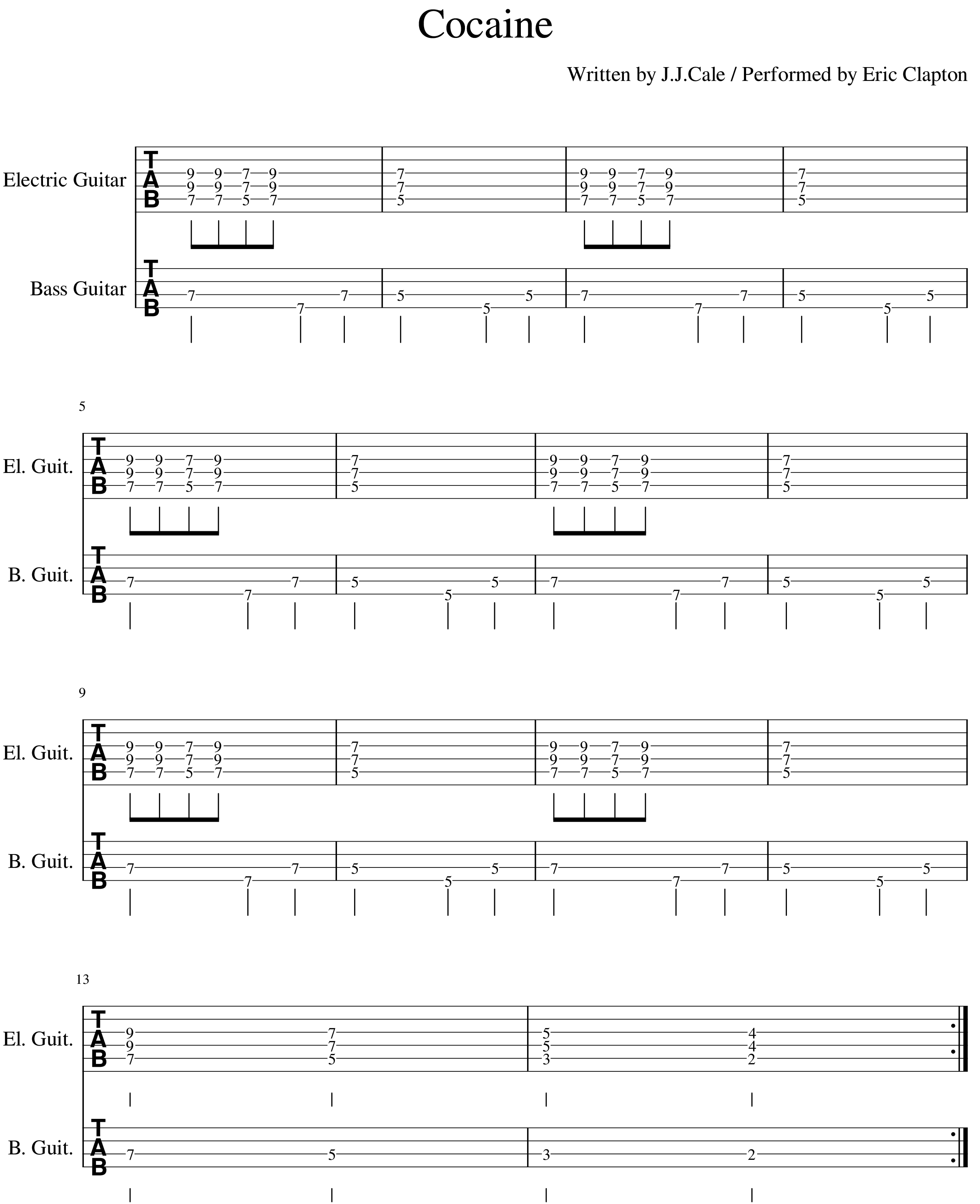 Clapton sticks to the E Minor Blues scale for the duration of the song.

For the verses, he relies heavily on notes from the open position of the scale. (Fig 6)

For the guitar solos he moves up to the 12th fret and plays notes from the 12th position of the E Minor Blues scale. At several points, there are two guitar solos playing at once, adding complexity and difficulty. (Fig 7)

There are a lot of guitar players out there who like to play everything note-for-note, but with someone like Clapton you certainly can’t go wrong, because no time spent learning his solos will be time wasted. If you want to play your own solos though, you can “act” like Clapton does on this song by playing your favorite Blues licks in the E Minor Blues scale. Use the open position when the vocals are going, and when it’s time to solo, jump up to the 12 fret and play up there. Get weird and try out some runs using the Aeolian scale and see how it changes the flavor of the song but still “fits.” (Fig 8)