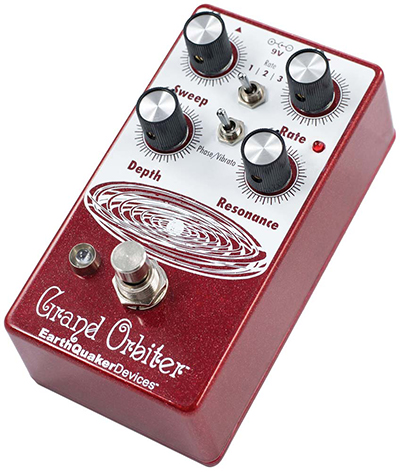 The Grand Orbiter V3 is a four-stage phaser that uses an OTA-based circuit to make it an analog pedal featuring a three-way switch with three different modulation ranges.

Rate 1 is a slow sweep mode, Rate 2 turns off the LFO and lets you use the Grand Orbiter as a fixed resonant filter, and Rate 3 is a fast sweep mode. The Grand Orbiter also features something called Flexi-Switch Technology, which is a relay-based, true bypass switching style that allows you to do two different things with the same switch. For the standard On/Off operation, you tap the footswitch once to activate the effect and then you tap it again to bypass the effect. If you would like the effect to be momentary, you can hold the footswitch down for as long as you’d like. Once you release the switch the effect will be bypassed.

The pedal also includes four controls to fine-tune your sound: Depth controls the amount of phase mixed with dry signal, Rate controls the speed of the LFO, Sweep controls the frequency peak of the sweep, and Resonance controls the regeneration of the phased signal. The Grand Orbiter also features a Phase/Vibrato toggle switch which cuts the dry signal to create a vibe/vibrato effect. On/Off is signaled by a bright LED and an additional LED shows the rate of the phase, even in bypass mode. The pedal requires a standard 9-volt DC power supply with 2.1mm negative-center barrel.