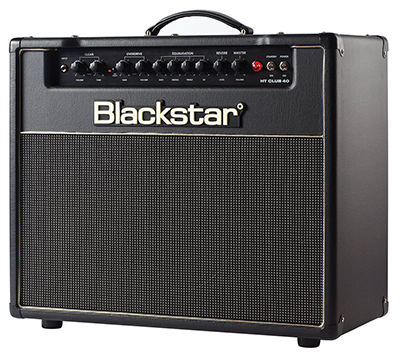 The Blackstar HT Venue Series Club 40 has a USB preamp, bringing it into the modern age and adding to its already impressive versatility.

The Blackstar HT Venue Series Club 40 is a 40-watt all-tube combo amplifier. It uses two 12AX7 tubes in the preamp section and two EL34 tubes in the power section. The 40 watts is switchable to four watts for a great tone in smaller environments. It uses one 12″ Celestion Seventy 80 speaker for a modern British sound.

The Blackstar has two channels and a supplied footswitch. The Clean channel has Volume, Bass, and Treble controls. The Overdrive channel has Volume, Gain, Bass, Middle, and Treble controls. Overdrive also has something called “ISF” or Infinite Shape Feature, which is unique to Blackstar Amplification and allows for more tone manipulation. Both channels also share a digital reverb with two separate settings, light and dark, and there is also a Master Volume.

There are a clean voice switch and an overdrive voice switch for even more tonal flexibility. There is a standby switch, effects loop, as well as an auxiliary speaker-emulated output (both XLR and 1/4 inch) for easy recording or headphone use. There are external speaker outputs and even a USB out, complete with a USB preamp, bringing this amp into the modern age and adding to its already impressive versatility. The amplifier weighs 53 pounds, making it fairly manageable.