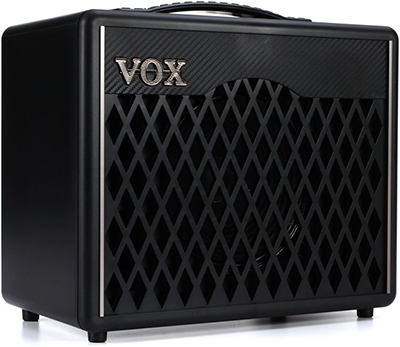 Made by one of the original amp creators, the Vox VXII 30W 1×8 Digital Modeling Guitar Combo Amp features VET (Virtual Element Technology), a unique approach that models the circuits inside the amp, instead of just modeling the sound itself.

You can save up to 22 presets for quick recall. It features a USB audio interface function with ASIO support allowing you to not only interact with bundled JamVOX III, but also to interface with your recording software. An additional editor application, which allows for simple storage and editing of your favorite sounds, is also provided.

A headphone jack and an Aux input are also built into the amp. Vox uses a unique bass reflex structure in conjunction with a sealed, one-piece speaker enclosure. The cabinet’s shape, the curvature of the front and back surfaces, and the internal reinforcement ribs have all been designed to optimize the resonance.