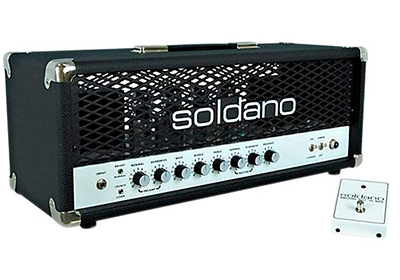 The Soldano SLO100 100W Tube Guitar Head has two channels, both of which have their own Volume and Overdrive controls.

Created in 1987, the Soldano SLO100 100W Tube Guitar Head remains very popular today. Well-known guitar players who use the Soldano SLO100 include Eric Clapton, Mark Knopfler, Eddie Van Halen, Lou Reed and Tommy Kessler. The amplifier is driven by four 12AX tubes in the preamp section and four 5881 tubes in the power section. The 5881s are more rugged versions of the 6L6 tubes.

This amp has two channels, both of which have their own Volume and Overdrive controls, and they share a three-band EQ with Bass, Middle, and Treble control knobs. The Clean channel provides a warm, clear tone with plenty of headroom, and Overdrive delivers on its promise with plenty of focused and controlled overdrive.

The included footswitch allows you to silently switch between the two channels. There’s also a Presence knob and a Bright switch for more control over the amplifier’s high end. The Soldano SLO100 features a tube-buffered effects loop for a warm effects tone placed after the amp’s overdrive. On the back panel, there’s a Volume control to adjust the effect and a rotary switch that will let you select between 4-, 8-, and 16-ohm speaker cabinets.