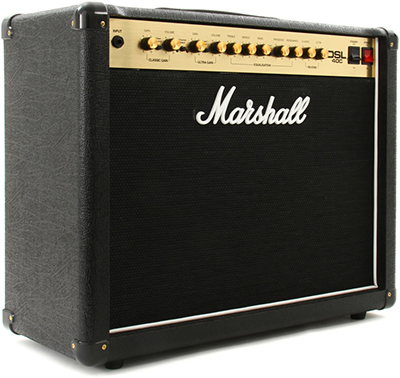 The Marshall DSL40C Combo Amp has two channels, Classic Gain and Ultra Gain, both of which share a five-band EQ.

The Marshall DSL40C is an all-tube, 40-watt combo amp that’s ready to play small to medium sized venues and still do its job in practice. It features a single 12″ Celestion Seventy 80 speaker, that’s designed to be detailed, with controlled low-end, aggressive upper mid-range, and subtly increased highs.

The Marshall DSL40C uses four 12AX7 tubes in the pre-amp, and two EL34 tubes in the power section. It has two channels, Classic Gain and Ultra Gain, and a supplied footswitch. Each channel has two modes. Both channels share a five-band EQ: Low, Mid, High, Presence, Resonance (gives the guitar depth). There is also a Mid Shift button for even more tonal flexibility.

Each channel gets its own foot-switchable digital reverb and also its own gain and volume knob. The Marshall DSL40C also has a bypassable effects loop, and a standby switch to help with recording. It has two outs for additional speakers when playing live. There is also a power reduction switch to toggle between 40 watts and 20 watts, to give you the right amount of power without sacrificing quality. The amp weighs 50 pounds, so it’s a little heavy, but still very manageable.