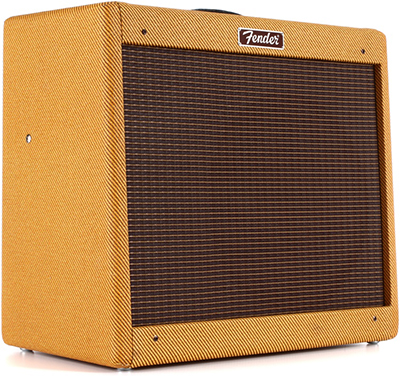 The Fender Blues Junior 15W 1x12 Combo has a three-band EQ and a footswitchable 'FAT' button that fattens up the midrange and helps you on that big solo.

The Fender Blues Junior Lacquered Tweed 15W 1×12 Combo is a perfect example of a big thing in a small package. It packs a serious punch (sometimes it’s hard to believe that this amp is only 15 watts). Using three 12AX7 tubes in the preamp stage and two EL84 tubes in the powers stage, the Fender Blues Junior keeps it simple and delivers a warm and buttery tone, with lots of sustain. Breaking up easily at low volumes, this amp is great for the apartment while still holding its own out on the stage.

The single 12-inch Jensen speaker more than delivers that “tweed” sound with plenty of headroom and stability. The Fender Blues Junior has a three-band EQ and a footswitchable “FAT” button that fattens up the midrange and can help you cut through on that big solo. The classic Fender spring reverb that we all know and love is also present.

This combo amp weighs only 31 pounds, so it is easily transported and is well constructed. Only one ¼-inch input jack and one ¼-output speaker jack show that the Fender Blues Junior is all business. Just plug in, play the blues, and sound great.