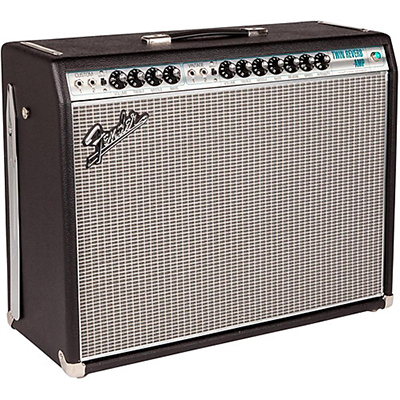 The two channels of the Fender 68 Custom Twin Reverb 85-watt 2x12 make use of four 12AX7, two 12AT7, and four 6L6 tubes, to deliver that familiarly creamy Fender Twin sound.

The 68 Custom Twin Reverb Amp is a tribute to the legendary late ’60s Fender Twin Reverb featuring that retro “silver face” design. Two Celestion G12V-70 speakers are driven by 85 watts of tube power, perfect for any small to medium venue. The Fender 68 Custom Twin Reverb 85-watt is a little bit heavy at 64 pounds, but that is to be expected, with the two 12-inch speakers and added bracing.

This Custom Twin Reverb has two channels, but unlike the original Twin Reverb, both channels have the classic reverb and vibrato, and something called Reduced Negative Feedback for “greater touch sensitivity.” The two channels make use of four 12AX7 tubes and two 12AT7 tubes in the preamp section, and four 6L6 tubes in the power section, to deliver that creamy Fender Twin sound.

The Custom channel has a Bassman Tone Stack while the Vintage channel has the original tone. Each channel has its own three-band EQ for further tone-tweaking and you can use an A/B/Y foot pedal to blend the two channels together for a third tonal option.